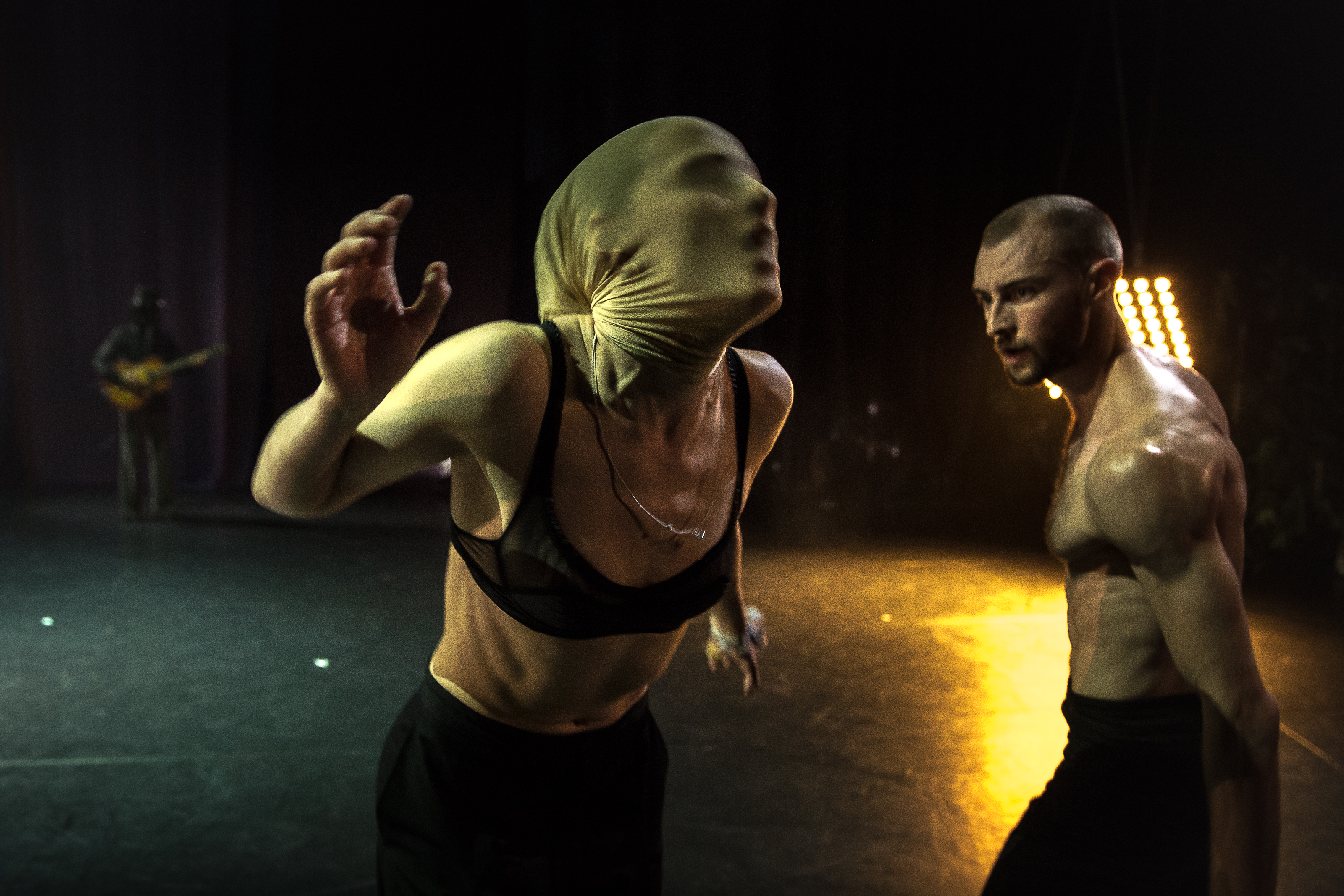 Speak low if you speak love …

For Wim Vandekeybus love is perhaps the most intangible and capricious of all our inner states of mind: it moves mountains, and creates immeasurable heights and depths. It gives strength,but causes devastating pain when it turns against you. Love inspires poetry: it is exalted andcursed.

Following the captivating soundtrack in nieuwZwart(2009), Wim Vandekeybus is once again collaborating with musician Mauro Pawlowski. This time, classical stories will be the inspiration for songs written by Mauro and his compagnons and performed by the charismatic South African singer Tutu Puoane. Ultima Vez performers and more classically-trained dancers influence one another.

Speak low if you speak love … isn’t an opera, nor a musical in the usual sense of the word, but a stirring combination of experimental music and the classical tradition.

It is not Wim Vandekeybus’ intention to provide an all-embracing framework by which to understand love, because the comprehensibility of love does not exist as such, it is weightless.

Vandekeybus: “Man gives it meaning and imputes to it a certain connotation. Wha twe are concerned with is the recognition and the emotionality. Love can hardly be captured in words,but music is able to arouse a certain feeling, and is after all able to convey the incredible power of love. Love is a hidden force; it’s in every nook and cranny, it’s everywhere, but you can’t simply disregard it. That’s why it’s ‘Speak low…’

Wim Vandekeybus was born in Herenthout (Belgium) on 30 June 1963. His father was a vet. After finishing secondary school, he moved to Leuven to study Psychology. In 1985, however, he decided to follow a completely different path and auditioned for Jan Fabre, who gave him a part in The Power of Theatrical Madness. One year later, he founded Ultima Vez.

His first show, What the Body Does Not Remember, was an international success, earning him a Bessie Award (New York Dance and Performance Award) for its innovation. And now after almost 30 years and a whole series of films and videos, Wim Vandekeybus is still searching for novelty and innovation.

“For me, the form has to be different every time,” he explains. “This is why on one occasion I might create an extremely musical show (nieuwZwart or Speak low if you speak love…), then for my next project base a film on the experiences of one man (Monkey Sandwich), why I then might switch to a classical mythology play (Oedipus/bêt noir) or even an analytical piece in which theatricality plays a major part (booty Looting or Talk to the Demon).”

In all these very different productions, Ultima Vez nevertheless remains true to its own movement idiom. Tension, conflict, body versus mind, risks and impulses. Physicality, passion, intuition, instinct. These are essential elements that will always be part of Vandekeybus’ work. But on each occasion they are given a completely different appearance. This variety is made possible partly through collaboration with dancers, circus performers, actors, musicians and other artists from a whole range of disciplines.

Music and sound have naturally become the common thread running through his work. Peter Vermeersch, Thierry De Mey, David Byrne, Marc Ribot, Eavesdropper, David Eugene Edwards, Daan, Arno, CharoCalvo, Mauro Pawlowski, Roland Van Campenhout and Elko Blijweert have all composed music for his shows. As a generalrule, their compositions are written during the rehearsal stage so that the show and the music develop symbiotically.

However, photography and the lyrics and lines are equally important. In booty Looting, Danny Willems took photos – he walked around the stage among the performers, his eye to the lens, and presented his photos live. The writer Peter Verhelst has worked on scripts for Vandekeybus four times (Scratching the Inner Fields, Blush, Sonic Boom and nieuwZwart) and Vandekeybus used Jan Decorte’s adaptation of Oedipus, for Bêt noir, no less than three times before he had finally finished with this text.

In December 2012 Vandekeybus received the Keizer Karel prize from the Province ofEast Flanders. This prize is awarded every three years to an artist as a mark of his exceptional talent in the field of art and culture, his commitment and his work with younger generations. One year later Wim Vandekeybus and Ultima Vez became the 6th laureate of the Evens Arts Prize. They receive the Prize for their important contribution to European contemporary dance, for their multidisciplinary work and for their social and cultural commitment.

2015 sees the screening of Galloping Mind, Vandekeybus’ first full-length film. It was shot in Hungary and on the Black Sea in Romania and tells a dramatic story of family ties, betrayal and triangular relationships, with Jerry Killick, Natali Broods and a gang of children on horseback in the leading parts.

Mauro Pawlowski starts his music career in the early nineties as a guest and studio musician for Belgian bands such as Leopold 3, X-Legged Sally, Transformer 2, Kiss My Jazz and Bedtime for Bonzo. In 1994 Pawlowski wins Humo’s Rock Rally with his absurdist rock band the Evil Superstars. Together with other bands such as dEUS, Moondog Jr., K’s Choice and Channel Zero, the Evil Superstars play an important role in the revival of the Belgian rock scene in the mid nineties.

After two albums Pawlowski dissolves the Evil Superstars in September 1998. He stays active in the bands such as Mitsoobishy Jacson and Kiss My Jazz.

In 2001 he releases the album Songs from a bad hat under the name Mauro, recorded in New York with producer Dave Sardy, and forms a new band: Mauro &The Alternatives.

In 2004 he records five full-albums with as many different bands: Live in Anvers with Alex Chilton recorded during the festival De Nachten in Antwerp; Black Europe with his hard rock band Mauro Pawlowski& the Grooms and the absurd album Swamps of Simulation with Somnabula. For The Love Substitutes Mauro exchanges his guitar for the drums and records the raw rock album While The House is on Fire. With Pascal Deweze and Carol van Dyk he forms Shadow graphic City, a trio of strong personalities releasing the eclectic pop album with the same name. Since the end of 2004 Pawlowski replaces Craig Ward as second guitar is with dEUS. He plays on the dEUS album Pocket Revolution (2005) and writes several songs for their albums Vantage Point (2008), Keep You Close (2011) and Following Sea (2012).

In 2009 Mauro Pawlowski brings his universe into the creation process of nieuwZwart, a performance by Wim Vandekeybus / Ultima Vez. Not only did Mauro compose the original music, he also accompanies the performances live on stage together with two other musicians Elko Blijweert and Jeroen Stevens. For Speak low if you speak love … (2015), Mauro and Wim Vandekeybus are once again collaborating. This time, classical stories will be the inspiration for songs written by Mauro and his compagnons and performed by the charismatic South African singer Tutu Puoane. Wim Vandekeybus: “ Mauro is a master of rhythm, soul and virtuosity. His music is intriguing, daring and fearless. It goes straight to your belly and overwhelms your consciousness.”