With the support of: MARCHE TEATRO

In Joseph_Kids we see on stage a performer, a lonely man in front of his laptop. Like in the version for adults, the interpreter is searching for his own image, which in turn is projected, deformed, doubled, deconstructed via the webcam and the application of basic video effects. Joseph makes his choices in front of the audience/witness that can follow the development of this physical monologue thanks to a video-projection that reproduces exactly the screen of the laptop. At the beginning, serious and rigorous, Joseph’s journey becomes ironic and unexpected when the man pretends to be inside a virtual western gun duel, while his intense image breaks up in magical rays of light and his gaze, loosing its human form, turns alien.

The expanded projected image embraces the entire young audience with an unexpected ending. This work aims to show children how technological tools can be potential carriers of creativity and not the cause of mere alienation. Joseph_kids is a show that is fun to watch while making the audience think, among other things about the fact that we can move in a performative space in ways that can be always new and surprising. This is a work that takes into consideration the deep understanding and insights that every young spectator (and potential performer) possesses. 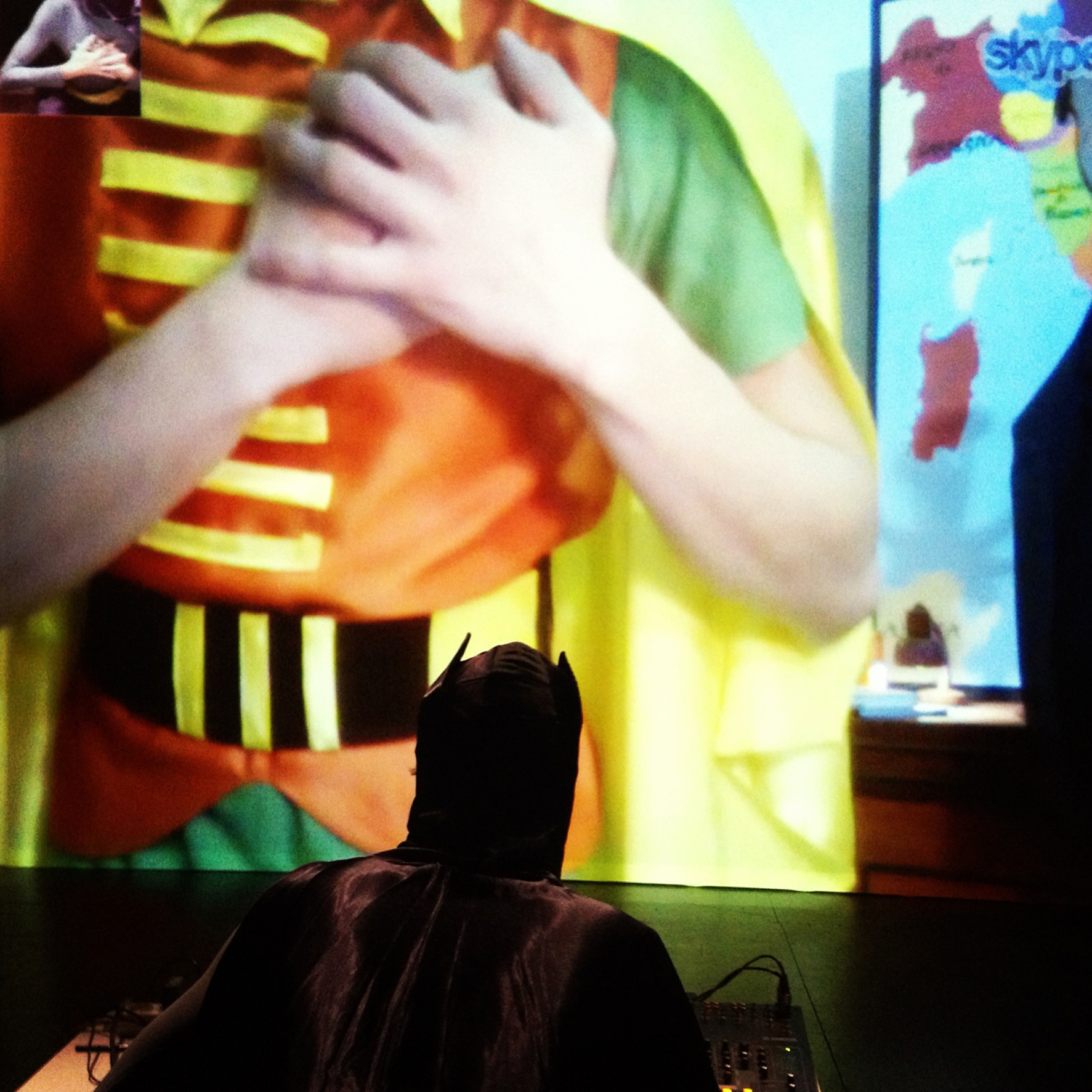 is an Italian artist active in the field of Performing Arts with several years of experience in visual arts and theater research.

His work goes beyond the traditional definitions of gender. He starts from a conceptual Duchamp-like matrix, makes use of a theatrical framework, and he can use some techniques and experiences from dance, as well as circus or sports. In addition to the rigor, coherence and clarity of each creation, his work tries to uncover obsessions, fears and fragilities of the act of performing, through the repetition of a practice to the limits of the physical endurance of the interpreters, looking at a different dimension of time, and to an empathic relationship between the audience and the performers.

His works have been performed in 21 European countries, the United States, Canada, Brazil, Uruguay, and the United Arab Emirates. Among the main events he took part: the Biennale de la Danse in Lyon, Kunstenfestivaldesarts in Brussels, Impulstanz Festival in Wien, the Venice Biennale, the Festival d’Automne and the Festival Séquence Danse at 104 in Paris, Abu Dhabi Art Fair, Juli Dans Festival in Amsterdam and he exhibited his work at the Centre Pompidou in Paris and the MAXXI Museum in Rome.

His works were presented within circuits and networks for the diffusion of contemporary dance and artists mobility such as “Antibodies Explo”, “Aerowaves” and “Modul Dance”, a multi-year cooperation project which involves 19 European Dance Houses from 15 different countries. Over the years he took part in numerous European projects and research residences as “Choreographic Dialogues” (2010), “Choreoroam” (2011), “Performing Gender” (2014): a European project on gender and sexual orientation and “Migrant Bodies”(2014-15): a research and choreography production project which aims to promote reflections and creations on the theme of migration and its cultural impact on the European and Canadian societies.

is supported by APAP – Advancing Performing Arts Projects – and his shows are produced by Marche Teatro in collaboration with international co-producers such as the Comune di Bassano del Grappa / Centro per la Scena Contemporanea, the Biennale de la Danse / Maison de la Danse de Lyon, the Mercat de les Flors-Graner / Barcelona, Centrale Fies and the Association Corpoceleste_C.C.00# of which he is artistic director. It is also one of the artists of the Project Matilde, regional platform for the new scene in Marche.

In 2015, Alessandro Sciarroni was appointed Associate Choreographer of the company of the Ballet of Rome and he is supported for his latest creation – “Aurora” – from the Fondation d’Entreprise Hermès.

is a performer and choreographer active in the field of theatre, dance and cinema. He has trained as a dancer, among the others, with Yasmeen Godder, Nigel Charnock, Emio Greco, Simona Bertozzi, Sharon Friedman, Jorge Crecis, Rachel Krische, Guillermo Weickert.

Among his works as a dance maker, viola (winner of Premio Gd’A Veneto 2010, selected in the networks Aerowaves 2011 and Anticorpi XL 2011), Spic & Span (winner of Segnalazione Speciale Premio Scenario 2011), let sleeping dragons lie (winner of Premio Prospettiva Danza 2012). In 2013 he created two pieces about aging and passing of time in the frame of the Act Your Age project, Last day of all and Last day of M., both with no professional dancers. His new piece, Everything is ok, will première in June 2015.

He has also played as the main character in the multi-awarded movie Days of Harvest (IT, 2012) and won the Giglio d’Argento Prize as Best Male Actor in the Valdarno Cinema Fedic Festival 2012.

choreographer and founder of the contemporary dance group MK.

The latest production, Robinson, is on tour, together with many other non-stage oriented formats.
The Santarcangelo International Festival 2014-15 invites him to articulate the special project Platform of Balinese Dance for the whole festival.

Autumn 2014 he creates Upper East Side for Aterballetto and Line Rangers for the Korean National Contemporary Dance Company. He is the artistic director of Tropici, an irregular platform for live arts in Rome and the performer in Joseph_kids by A.Sciarroni.

In 2015 he is invited for the fourth time at Biennale Danza in Venice.

He is awarded with the Silver Lion for innovation in dance at the 9.Venice Biennale International Contemporary Dance Festival 2014.