„With 5 exceptional performers we will dwell into theme of incredibly powerful social phenomena. And that is the story of one of the greatest pleasures of human being-killing and participation in violence. We will examine this topic of everyday experience through history of art practice and especially through it appearance in fine arts and cultural criticism.

It will be a study of provocation that does not touch the obvious, but examine subtle aspects of human behavioral evolution and what kind of evolutionary pressures we passed and passing through in today’s unprecedented lifestyle oriented only towards selfish momentary pleasures.“ 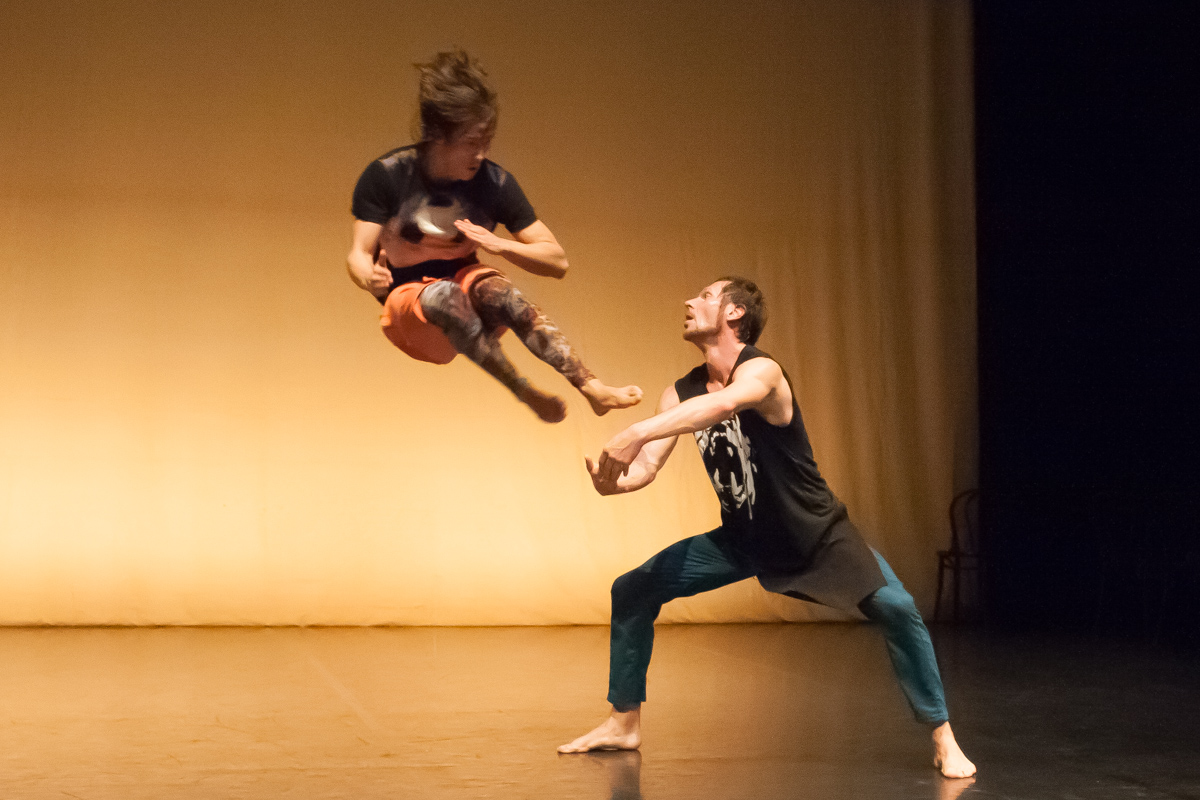 is the first fully professional physical dance theatre company in the Czech Republic which was founded in 2006 by its artistic director Lenka Ottová.

Lenka Ottová´s aim was to establish in the Czech Republic an internationally respected company that was missing on the Czech scene, and which would offer a background for outstanding dancers and substantially step into the development of the area of contemporary dance. In view of the company´s success on both Czech and international scene, the aims are being fully fulfilled.

DOT504 is characterised by high technical quality, creativity and strong personalities not only among the performers, but especially among the creators of each project. Personalities working succesfully on the international scene of physical dance theatre, who can bring an inspiring change to the Czech dance, are invited to collaborate with the company.

DOT504 is supported by the Ministry of Culture of the Czech Republic, Prague City Hall, its founder, Dance Perfect studio, etc.

graduated from the Greek State School of Dance in 1994. With a scholarship from the Greek National Scholarship Foundation, she later studied at the Merce Cunningham Studio, Movement Research and Dance Space, New York, where she also worked with choreographer Irene Hultman. In Greece, she danced with several companies (Sine Qua Non, Horeftes, and others) touring extensively around Europe, while in 2002 she was awarded as a “Best Performer”; Linda has been a member of ULTIMA VEZ – Wim Vandekeybus. During the last three years she has been frequently invited to teach in SEAD-Salzburg, Budapest State Dance School, DOT 504. Since 2006 is Linda staff teacher in State School of Dance. She is a founding member of RootlessRoot, a company with which she created performances Sudden Showers of Silence, Holdin Fast, Burned tree is visiting Athensbeforenextsummer.

graduated from the Academy of Performing Arts in Bratislava, where he also completed his PhD in 2001. As a dancer teacher and choreographer, he collaborates with the Dance Centrum Jette in Belgium, RITS Art School Brussels, DOT 504 Prague, Archa Theatre Prague, KVS-Royal Flemish Theater Brussels, SEAD- Salzburg Experimental Academy of Dance, Budapest State Dance School. Since 2006 he is staff teacher in State School of Dance. Jozef has been a member of ULTIMA VEZ-Wim Vandekeybus. Currently, he works on research program entitled “Open Neutral Proposition” and “Fighting Monkey” (implementation of martial arts’ methodology on performance training and program for injury prevention). He has participated in major theatre and dance projects, experimental and research groups, has won award for new choreographers and has directed several performances. He is a founding member of RootlessRoot, a company with which he created performances Sudden Showers of Silence,Holdin Fast, Burned tree visiting Athens Before Next Summer.