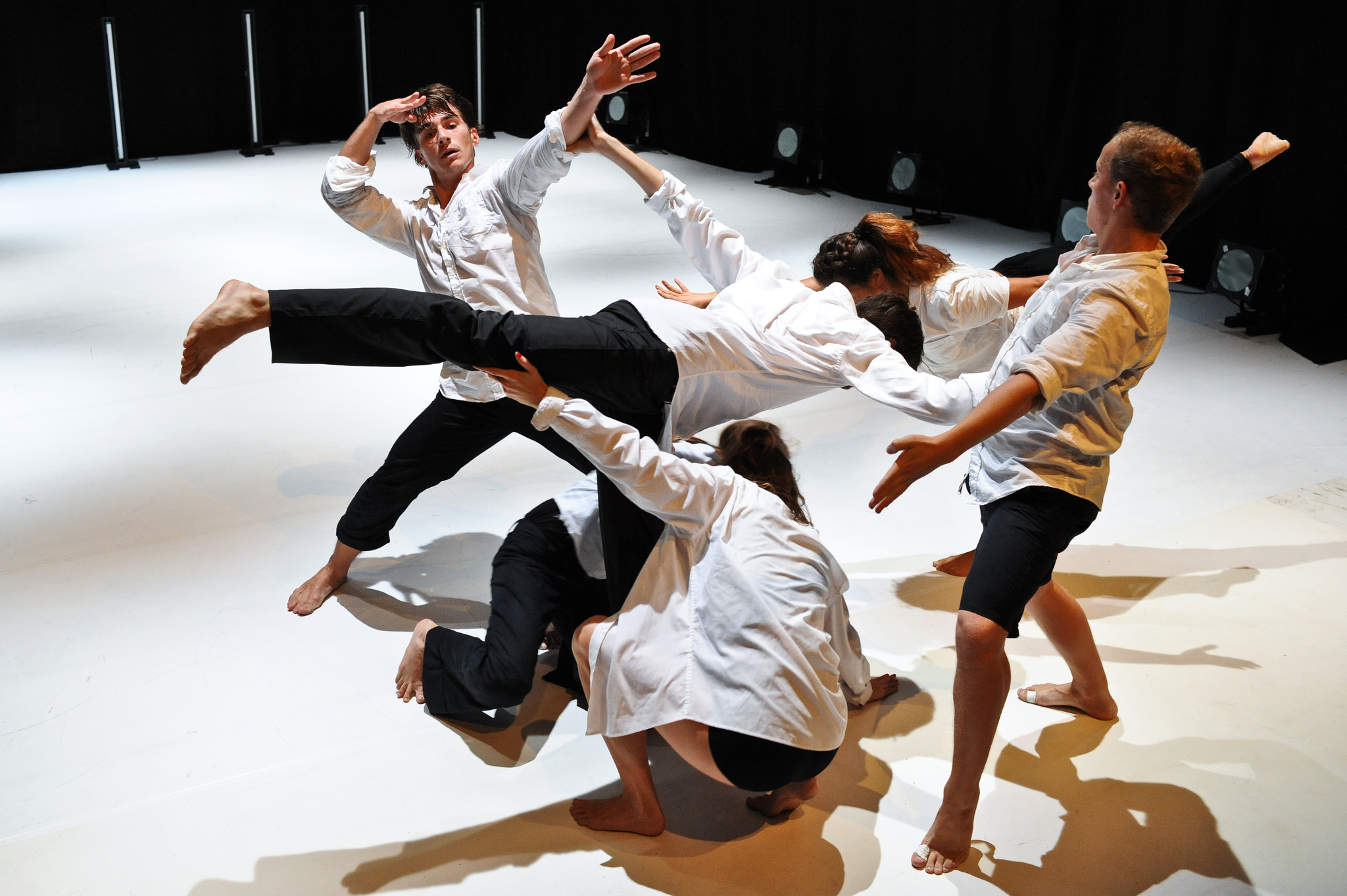 Inhale – exhale – standstill – action – reaction, they all form the connecting tissue of the dance performance Hunting Season. A seemingly meditative activity appears in the course of the performance in various scenes of gradual gradation and increasing density. Each hunt requires concentration, attention, self-denial, merging with the surroundings, listening to inner and outer impulses. All one needs for the sudden release of tension leading to the flash-like moment of hunt.

The hunting principle serves here for the mutual “collisions” between dancers, which give them the opportunity to look at themselves, at others and at the group as a whole. Stories that emerge among them reach beyond the psychology of the individual, the hunter, the group. They reveal glimpses of insanity, egotism, vulnerability and moments of beauty within us, the humanity, the world. Welcome home, in the world of tension, release, hunt and (non)sense, but also of humour, irony, competition, heart-breaking duets and solos. C´est la vie.

The project is realized with the support of the Ministry of Culture of the Slovak Republic.

Milan Tomášik, born in Slovakia, currently lives and works in Slovenia. He studied dance at the J. L. Bella Conservatory in Banská Bystrica and at the Academy of Performing Arts in Bratislava. In 2004, he graduated from P.A.R.T.S, the international dance school in Brussels directed by Anna Teresa de Keersmaeker.

In 2001, he participated in Vienna’s ImpulsTanz festival with a Dance Webscholarship and went on tour with the Dutch company MAPA (Moving Academy for Performing Art). Since 2006, he has started making his own work: dance solo Within (PTL, 2006), Baga-Basta in collaboration with Alexander Gottfarb (PTL, 2008), 3NITI, a show for three female performers (Flota, 2008), the multimedia performance Displaced Body in collaboration with Jelena Milovanović (Aksioma, 2010), the solo Off-Beat (Philéas Productions, Muzeum Institute, Plesni Teater Ljubljana, 2011), documentary-dance film Off-beat live in collaboration with Stanislav Dobák (2014). His last group work Hunting Season, of which he is both author and dancer, premiered in October 2014 in Slovenia.

In Slovenia, he has also collaborated with several established choreographers. In 2004, he danced in Iztok Kovač‘ s company En-Knap, in the Mozart-Hype as I Wanna Be (2005). In the same year, Maja Delak and Mala Kline asked him to participate in the dance-theater performance Gallery of Dead Women (2005). Milan worked with choreographer Snježana Premuš (dance performance You, 2007) and theater director Barbara Novakovič Kolenc (theater piece Winter‘s Tale, 2007). Milan made the piece Veselosti minulosti (2012) commissioned by the Slovak dance company Divadlo Štúdio tanca.

He is co-founder and active member of Les SlovaKs Dance Collective, a company based in Brussels. With them, he has created three dance performances (Opening Night, Journey Home and Fragments) and from 2007 performed and toured in Europe, Africa, Middle and North America.