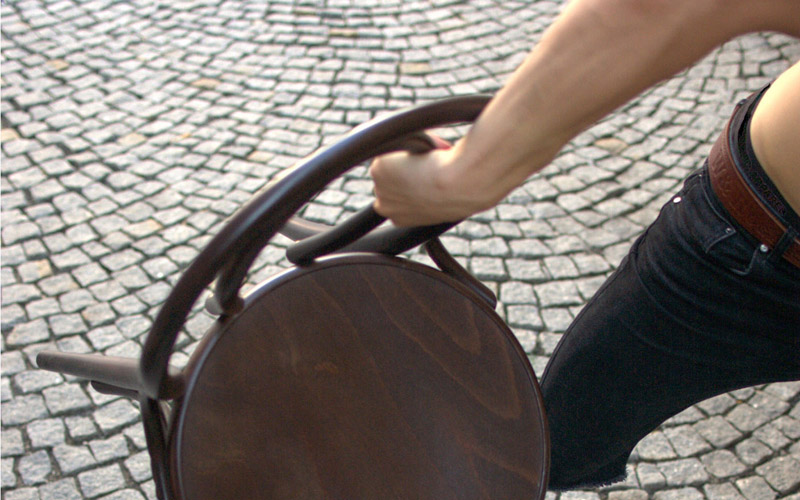 A performance in an unusual space gives the audience a new perspective on contemporary dance. The choreographers´s aim is to use senses to the maximum, as senses are the gate to perception and understanding of not only dance, but the world around us and ourselves within it. Sensory memory is the foundation and starting point of exploring the meaning of visual, verbal and non-verbal aspects of expression – from mechanics to sensations, from reason to feelings.

The scenes are created in the immediate vicinity of the audience. Performers and their actions are almost at our fingertips, so the audience may respond more actively then is common in the darkness of a theatre auditorium. A more active participation in the situation stimulates the viewers´ perception and understanding of movement and its components.

The project is supported by grants of the Ministry of Culture of the Slovak Republic.

Marta Poláková is a member of the first generation of independent contemporary dance makers in Slovakia ; she was founder and artistic director of the first professional contemporary dance company a dato (1990). Her work has been presented in the UK, France, Ireland, Danmark, Italy, Austria, Hungary and Czech Republic, as well as in Slovakia at the P. O. H. Municipal Theatre and the Slovak National Theatre Studio. From 2008 she leads the Laban Atelier Bratislava, which is a platform for artistic and educational projects aimed at Laban Movement Analysis and other approaches based on integration of body and mind in movement. She has published two treatises: Sloboda objavovať tanec/Freedom to Discover Dance (2011, Divadelný ústav) a Dynamické telo /Dynamic Body (VŠMU, 2013). She is associate professor at the Music and Dance Faculty of the Academy of Performing Arts in Bratislava.

A graduate of the Department of Dance Creation at the Academy of Performing Arts, Yuri Korec was member of the professional dance company Dance Studio in Banská Bystrica (2001/2002) and has cooperated with a number of dances companies around Europe: Ventura Dance Company (Switzerland), Retina Dance Company (Belgium), Jean Abreu Company (UK), Stephanie Schober&Dance Company (UK), Cocoondance Company and Stephanie Thiersch/Mouvoir (Germany). Currently he dances with CieLaroque/Helene Weinzierl (Austria). He has created several choreographies presented abroad, among them the multimedia performance h a b i t a t produced by Tanzplan Dresden, Semperoper Dresden and Paluca Tanzschule Dresden (2010). He is co-author and choreographer of dance films The Day (2004), DARKROOM (2008) a VoiceS (2010), the latter of which won several awards at festivals in Europe, Canada and the US. Yuri is intensively studying the Rolfing – structural integration somatic method and is the first certified rolferTM   in Slovakia.

Peter Šavel has completed his bachelor studies at the Department of Dance Creation of the Academy of Performing Arts in Bratislava (2006). He has participated in projects by acclaimed Slovak and international choreographers and has begun to create his own choreographies. He continued his studies at the prestigious P.A.R.T.S. school in Brussels and graduated in 2010. He is co-author of several choreographies that have been selected for the prestigious international Aerowaves Festival, which chooses the so-called Top Priority Companies: One for you, two for me (2010), Much more than nothing (2013), Boys who like to play with dolls (2014), BAKKHEIA (2015). From 2011 Peter closely cooperates with the French choreographer Pierre Droulers (Charleroi Danses) and with the Catalunian choreographer Salvo Sanchis. Peter is currently based in Brussels as resident artist at Charleroi Danses, but is active in Slovakia as well.

Tomáš Procházka studied stage directing at the Academy of Performing Arts in Bratislava under Ľubomír Vajdička and Ján Štrbák. Since his exchange study at Rose Bruford College of Theatre and Performance in London´s Sidcup as part of the ERASMUS programme, Tomáš´s main interest is in physical theatre and performance. His work is aimed at classical texts in modern interpretations or adaptations and at postmodern drama. He first made his mark as a student directing the Slovak premiere of Jean Luc Lagarc´s texts I am at home and waiting for the rain and Elfriede Jelinek´s Winter Journey, both for Municipal Theatre Žilina. Since his third year of study he has cooperated with Marta Poláková, when they cooperated at the production of the text Portrait of Dora by Hélene Cixous. His production of Shakespeare´s Macbeth was successfully presented at international festivals and was awarded for best directing and set design of the 2012/2013 season by the Reflektor magazine. His productions are often marked by extreme psychological and physical situations.