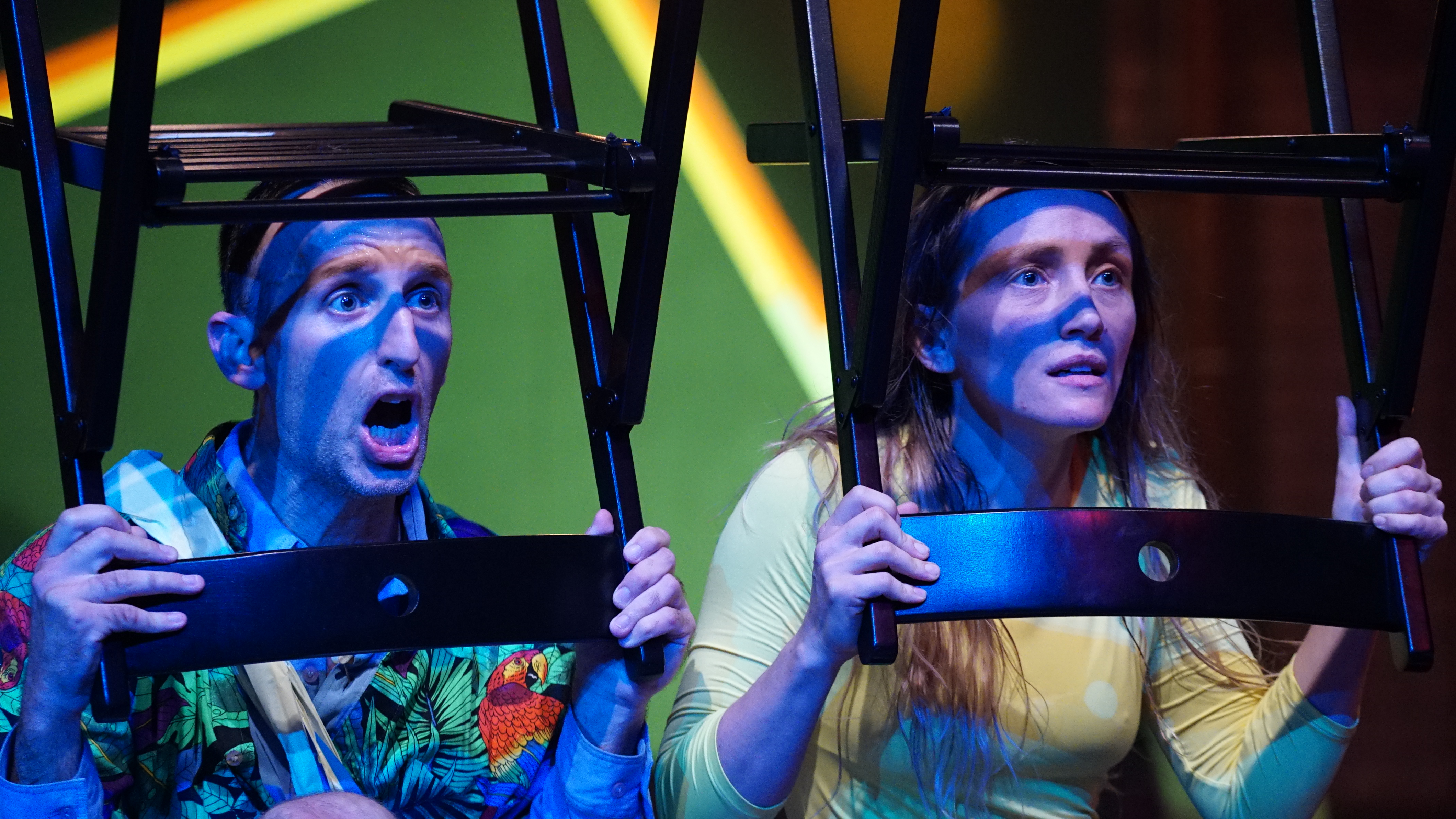 Come Jump With Me

Yossi Berg&Oded Graf’s newest work’ Come Jump With Me’ serves as a dialogue between the choreographers and Israel, the country where they live, and the identity crisis in which they find themselves.  In the explosive political and social reality of Israel, this work indeed pushes the limits and “plays with fire,” both literally and visually. Set in an imaginative playground involving different levels of consciousness, the performers move among personal and collective figures of history in a fantastic adventure, while trying to understand what future they are marching toward and their own definitions of “holiness.” The audience is invited to join them on an emotional roller coaster – from moments that are ecstatic and poetic, to moments examining the relevancy and significance of creating art in the urgent political reality of Israel.

Choreographers Yossi Berg and Oded Graf started collaborating in 2005, and they have since built a reputation for work that is supremely physical, sometimes provocative, and by turns poignant and witty.  Having performed with world-renowned troupes ranging from Batsheva Dance Company and DV8 Physical Theatre to others, they mix their masterful physicality with their dynamic research of theater, text, and voice. Responding to the social and political realities of contemporary life, the choreographers propose on stage alternative slaced with a disarming humor that surprises audiences, inspires deeper reflection, and offers hope.
Yossi and Oded’s singular brand of artistry has launched them to the forefront of Israel’s vibrant dance scene and placed them prominently on the world stage. The choreographers maintain a strong presence in Israel as well as their second home base of Denmark, and they also work frequently in other countries. Besides performing regularly at the Suzanne Dell al Centre and other venues in Israel, they have toured their works to prestigious festivals and theaters including Montpellier Danse France, American Dance Festival the U.S., Madrid En Danza Spain, Dansens Hus and Stockholm’s Kultur Festival Sweden, The Place Theater London, Lausanne Danse Switzerland, Belgrade Dance Festival Serbia, Tanz Tage Berlin, TANZ Bremen, Lipsiusbau Museum Germany, The Joyce Theater and La MaMa Theater New York City, White Bird Dance Portland, The Museum of Contemporary Art of Rome Italy, Israel Museum Jerusalem, SIDance South Korea, JCDN Japan, to name but a few.
In addition to touring their productions, Yossi and Oded have also been invited as guest choreographers to either stage or create new worksfor opera houses and dance companies across the globe. Their choreography has been included in the repertory of prominent troupes including Batsheva Ensemble in Israel; Donlon Dance Company/Staatstheater Saarbrücken, Tanztheater Osnabruck, Staatstheater Braunschweig, and Staatstheater Kasselin Germany; Introdans in Holland; Tanzkompagnie Theater St.Gallen in Switzerland; Company E in the U.S.; Aura Dance Company in Lithuania; Polish Dance Theater in Poland; Belgrade Drama Theater in Serbia; TND Company in Spain; Norrdans Company in Sweden; Baerum Kulturhus Copmany in Norway;and Junior Company in Denmark. The choreographers also teach and lead workshops in contemporary dance and improvisation throughout the world, drawing on their research of being present and partnering.

Yossi and Oded’s compelling choreography has garnered them numerous honors at home and abroad. To mention just a few – in 2011/12, they were named selected artists by Aerowaves and received Israel’s Ministry of Culture Award for Outstanding Choreographers; and in 2016 were awarded the Rosenblum Prize for artistic excellence and their achievements in Dance and Theater. They have also participated in prestigious artist-in-residence programs including Movement Research at Judson Church in New York, the Artist Village in Taipei, and Tanzplan Dresden, and their work has been co-produced by such venues as HELLERAU-European Centre for Arts and the Dresden Semperoper in Germany.

The choreographers’ rich repertory includes the Works Come Jump With Me; Bodyland; Black Fairytale; Forest; Eleven; Animal Lost; 4 Men, Alice, Bach and the Deer; Heroes; Most of the Day I’m Out; Bloody Disco; The Picnic; Wo-man in Tomatoes; Mechanical Trio in a Hot Country; Bear-girl King; Fairy tale Goes Bad; My Space; Optic; Heaven or Tel Aviv; Roots, to name but a few.