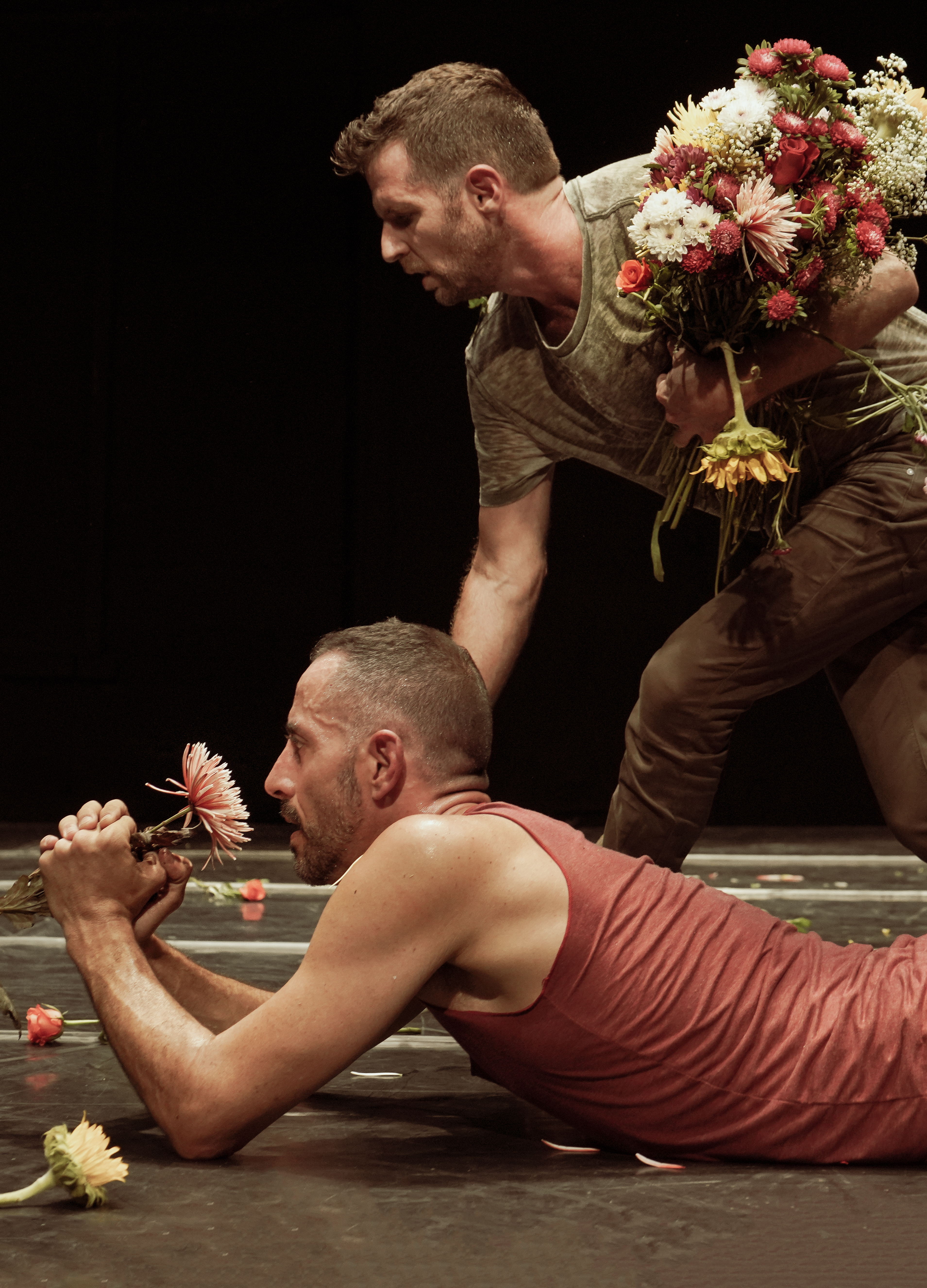 Niv Sheinfeld and Oren Laor have been creating together since 2004, and have established themselves in the forefront of the Israeli dance field. Sheinfeld’s background in dance and Laor’s background in theatre, allow for a blending of the genres, combining dance with performance art and physical theatre in their creations.

In their work, Sheinfeld and Laor reflect on personal experiences and motivations, and on social and political agendas. Their dance vocabulary creates a bridge between the more traditionally defined dance, and contemporary openness to fresh forms of expression, drawing their inspiration from both high art and pop culture.
They create their own independent projects, and were also commissioned to create works for several dance companies.

Their work Two Room Apartmentwas chosen ‘Best Performance of the Year’ in 2013 by the Israeli Dance Critics Circle, and their work The Third Dancewas crowned as the ‘Most Moving Performance’ in 2018.

Sheinfeld and Laor teach performance and movement research in dance and theatre academies in Israel and around the world, and they are also members of the artistic committee of Tmuna Theatre in Tel Aviv.

Choreographed and performed by: Niv Sheinfeld and Oren Laor
Inspired by The Third Danceby: Liat Dror and Nir Ben Gal(1990)

In their new work, Niv Sheinfeld & Oren Laor reflect upon themes of love, mortality and the need to be acknowledged. The Third Dancestarts with romanticism and its clichés – music by Mahler, flowers and a record player – but gradually uncovers a basic human need that lies beneath these cultural symbols.

A couple in life and on stage, Sheinfeld & Laor revisit a seminal piece in Israeli dance and contemplate on it from a contemporary stance acknowledging the time that has passed since their last duet: the changes in their bodies and relationship, their perception of stage and space and their interaction with the audience.

We use cookies on our website to give you the most relevant experience by remembering your preferences and repeat visits. By clicking “Accept All”, you consent to the use of ALL the cookies. However, you may visit "Cookie Settings" to provide a controlled consent.
Cookie SettingsAccept All
Manage consent

This website uses cookies to improve your experience while you navigate through the website. Out of these, the cookies that are categorized as necessary are stored on your browser as they are essential for the working of basic functionalities of the website. We also use third-party cookies that help us analyze and understand how you use this website. These cookies will be stored in your browser only with your consent. You also have the option to opt-out of these cookies. But opting out of some of these cookies may affect your browsing experience.
Necessary Vždy zapnuté
Necessary cookies are absolutely essential for the website to function properly. These cookies ensure basic functionalities and security features of the website, anonymously.
Functional
Functional cookies help to perform certain functionalities like sharing the content of the website on social media platforms, collect feedbacks, and other third-party features.
Performance
Performance cookies are used to understand and analyze the key performance indexes of the website which helps in delivering a better user experience for the visitors.
Analytics
Analytical cookies are used to understand how visitors interact with the website. These cookies help provide information on metrics the number of visitors, bounce rate, traffic source, etc.
Advertisement
Advertisement cookies are used to provide visitors with relevant ads and marketing campaigns. These cookies track visitors across websites and collect information to provide customized ads.
Others
Other uncategorized cookies are those that are being analyzed and have not been classified into a category as yet.
ULOŽIŤ A PRIJAŤ