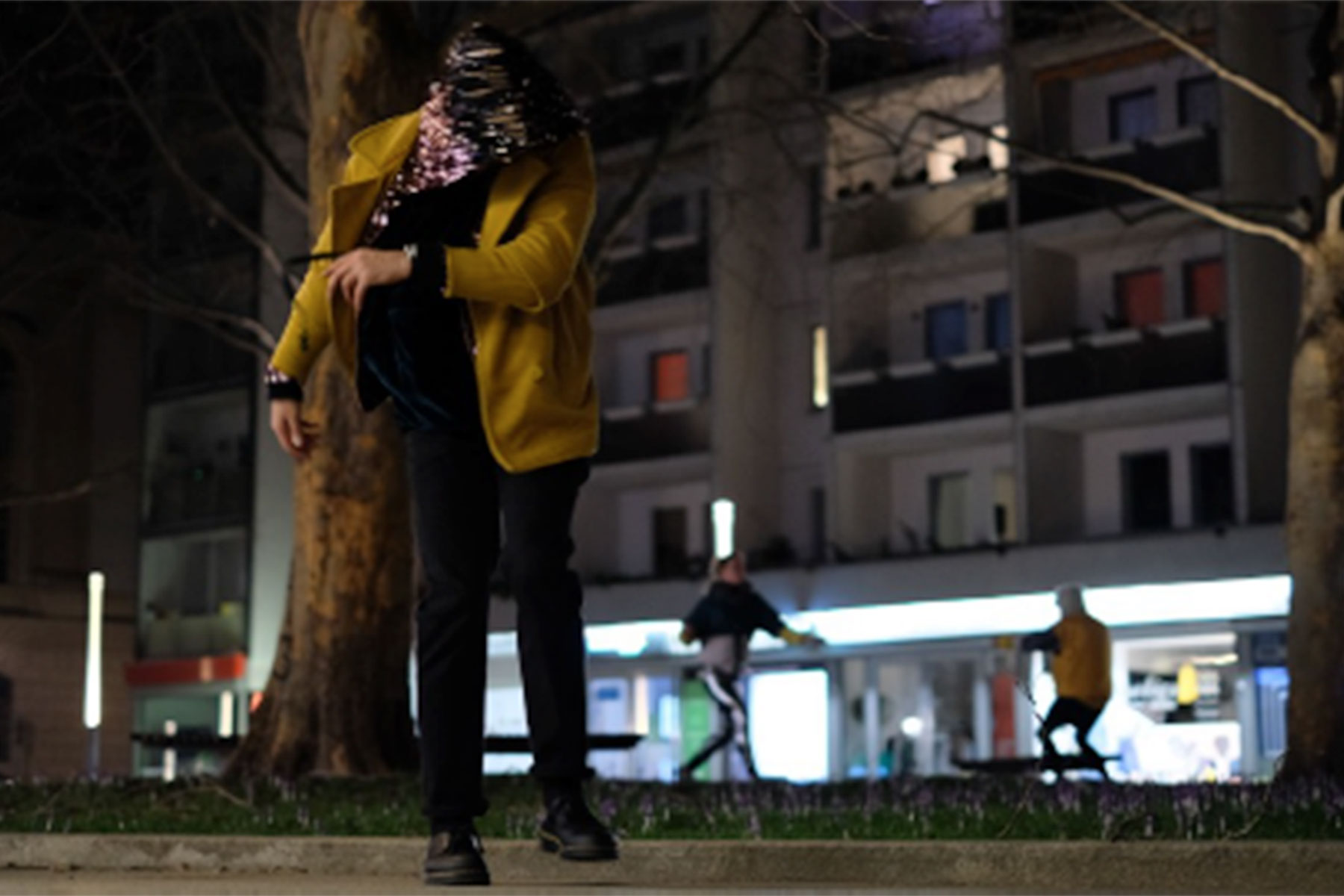 Site specific performance in the streets of Bratislava

The go plastic company, based in Dresden works as a free collective on diverse performance projects with the focus on dance and movement for performance spaces and in this project, as a first, in and for the public space in this size. The artistic constellations vary for conceptual reasons and allow us to conquer new areas.

Alexandra completed her Master in Conceptual Fashion Design at Burg Giebichenstein  in 2017. In 2016 Alexandra Börner worked as a costume designer for the performance group Wife around Nina MCNeely “Enter the Cave” and as a freelance designer for Sara Sachs in Los Angeles, 2015 as an assistant stage designer for Sara Sachs and Peaches for her music video “Free Drink Ticket” ( Los Angeles / Mexico). Since 2018 she has been collaborating in various projects with the go plastic company, including “phase2phase2.0″, “MOTEL VIBES” and most recently in “We’re Used to Being Darker“

Cindy began studying stage dance at the Palucca University of Dance Dresden in 2000. In 2009 she received the Arnhold – Esther – Seligmann grant. 2010 diploma in stage dance. She has worked with choreographers such as Emily Molnar, Yuval Pick, Amanda K. Miller, Rosie Herrera, Yeona Yu, Romy Schwarzer, Charles Washington, Paula Rosolen, Anna Till and Joseph Hernandez. Together with the musician Siggy Blooms, she founded the artist duo GOPLASTIC in 2010, which she transformed with her colleague Susan Schubert into the dance company go plastic company in 2012. She was a guest dancer at the BELACQUA Tanztheater Wasserburg am Inn, the Avatara Ayuso Company, Rosie Herreras Dance Theater, shot AG, the guts company and Haptic Hide. In 2013 she received the Arras Award 2013 from the Hanna Johannes Arras Foundation for the Promotion of Art and Culture in Dresden. Since spring 2016 she has been an associated artist with her company go plastic company in HELLERAU – European Center for the Arts. Since 2011 until today she is very engaged in the local art scene and an active member in the local dance network.

The American dancer and choreographer received his ballet training at the School of American Ballet in New York. After engagements at Les Ballets de Monte Carlo, the Royal Ballet of Flanders, the Ballet Austin and the New York CityBallet, he was engaged at the Semper Opera in Dresden in 2014. His own works have been shown at the Semper Opera, the Festspielhaus Hellerau and the Joyce Theater New York, among others. He has been working with go plastic since 2015.

Benjamin is a graduate of the Academy of Media Arts Cologne. He graduated in media arts in 2012 with a diploma. Since 2010 he has been designing virtual stage sets for opera, concerts and dance for groups in the Dresden independent scene (including go plastic, the guts company, Theater La Lune, Annette Jahns, Demian Kappenstein). As a director and cameraman, he has made artistic films in India, The Gambia, England, Spain and the USA. He bundles his work in the production company zeitgebilde. Benjamin has been associated with the go plastic company since 2013. He lives and works in Dresden and Berlin.

The project asphaltworlds deals in three different formats thematic aspects, thesis and values, and also the societal perception of the life on the streets, its challenges, deprivations and demands.

In various artistic constellations the company collaborates in those three parts with different partners and drafts interdisciplinary performance formats in and for the public space, to look at the subject from different angles.

The trilogy about a life without a roof over ones head shall challenge and open up, should be experienced and will last.

The trilogy kick-off is the cooperation with the Societaetstheater Dresden. In this first part a performative trio with installative character is going to research and develop artistic material based on social conventions, street codes and body arrangements. Developed and performed by the artists: Caroline Beach, Cindy Hammer and Joseph Hernandez, with live-sounds composed by Johannes Till and with visual materials by the artist Enrico Sutter. Artistic Directed by Susan Schubert and supported by project consultant Frauke Wetzel.

Second part of the series will take part in October 2020. In the cities of Dresden, Budapest, Prague, Bratislava, Vienna and Brno, artistic materials will be designed, tested and shared in the form of short stays. In places such as parks, train stations, bridges and in passages, the ever-growing group of artists tests and researches various performance formats and their impacts and effects.

During the 4 weeks, the team will be walking, venturing physical and choreographic interventions in public space, documenting them and creating a catalog of experiences. The second part thematically deals with life outside: which environment do you look for and create yourself? Nomadism as a (surviving) draft of life: opening up and occupying new, semi-finished, broken, ruined, free, preserved spaces. Always on the go, always looking for the “right” shelter, always temporary.

The third part will be realized in co-production with HELLERAU – European Center for the Arts in summer 2021.

A production of the go plastic company. Funded and supported by TANZPAKT Dresden, Trafo Budapest, KULTFestival Usti n.l. Cultural Foundation of the Free State of Saxony. This measure is co-financed by tax funds on the basisof the budget decided by the members of the Saxon State Parliament. With the kind support of TENZA Dresden.