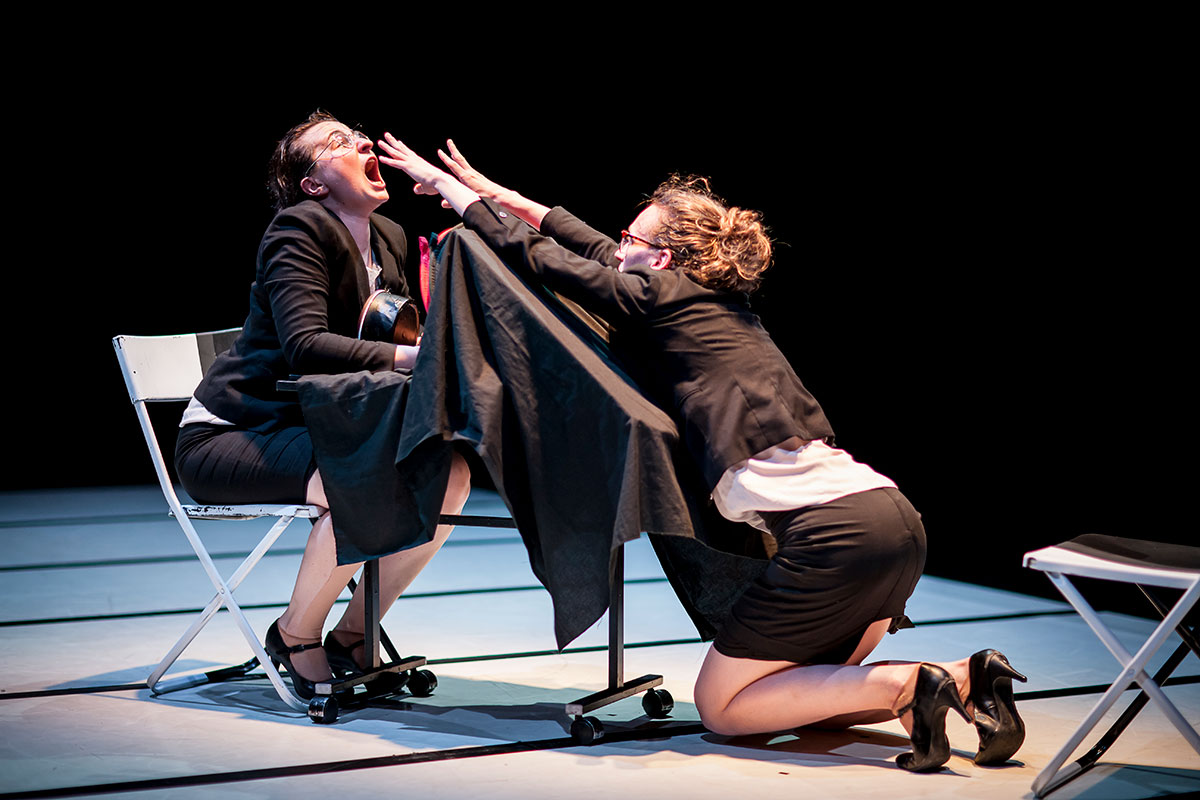 A native of France based in Belgium, KarinePonties has since her studies at the famous Mudra school been an inspiring muse and mentor for many Czech artists. In the late 1990s she first caught attention of the management of the Tanec Praha festival, on which she presented its debut for her own company Dame de Pic which she had founded in 1996. Since then she has literally returned every second year with new pieces. Her cooperation with local artists, among them Jaro Viňarský and Pierre Nadaud, culminated with the choreography Mi non sabir, which was presented at Trans Dance Europe. Their paths crossed regularly and opened towards exploration and fusion of movement, light, design and music, attracting other Czech artists.

is lighting and graphic designer, as well as theatre creator, he has been based in Brussels since 2009. Guillaume offers a vision of the scenic arts which is free of barriers, and he is known to more than fully commit to his artistic partners.

While his research around darkness and organicity have naturally led him towards dance, along Karine Ponties most notably, he remains very close to the theatre and the stakes it raises in our society.

The technical and technological expertise he has acquired through the conception and realization of large scale events, together with his grassroots knowledge of theatre inherited from his street theatre work and many international tours provide endless support to creativity and dialogue.

Tereza Ondrová is a dancer, graduate of dance pedagogy at the Music Academy of Performing Arts. In 2004 she founded the VerTeDance collective, which has presented more than 20 dance productions since then.

Since 2012 Tereza has been cooperating with Petr Šavel, with whom she co-created two duets. The first is Boys Who Like to Play with Dolls (Total Theatre Award Nomination, Amnesty International – Freedom of Expression Award 2015, Priority Companies List 2014 of the Aerowaves network, nomination for Best Dance Production 2014, nomination for Dancer of the Year 2014). The second As Long As Holding Hands premiered at the Tanec Praha festival in 2015. Since 2016 Tereza has closely cooperated with the director Petra Tejnorová, together they have created You are here(2016) – nomination for Performance of the Year2017, Nothing Sad (2017) a Pojďme na tanec! (2017) and the film documentary Haló, je tam někdo? (2017),which premiered at Tanec Praha.

Petra Tejnorová constantly seeks new procedures and fusions and is a prominent figure of the alternative theatre scene. She creates her own theatre projects and commissioned pieces for other companies. She studied direction at the Academy of Dramatic Arts, where she graduated in 2009 with a production of Shakespeare´s Titus Andronicus(The Fly Scene). Currently she is teacher at her alma mater, where she completed her doctoral thesis in 2016.

Her international projects have been presented at several prestigious festivals such as (Zdarzenia – Tczew, Stockholm Fringe Festival, APAP New York, Fira Tárrega Spain) and culminated in the two-part theatrical road-movie Paměť krajiny – Krajina paměti (2008) and the piece Osobní Anamnéza(2009). In 2008 she was nominated for the Alfréd Radok Award in the category Talent and in 2009 she received the Josef Hlávek Award.

Petra Tejnorová has been experimenting with physical and documentary theatre and exploring the relationship between the actor and the spectator. In her own projects she puts emphasis on collective creation, devising methods and perceiving the performance as a unique event. She focuses on the genre of live cinema – a combination of theatre and film by the German playwright Dey Loher Innocence (2014, Hall 2, Chirana) or the story based on real events NICK (2015, Slaughterhouse 15) or in the mysterious detective story Láska a informace (2016, New Stage of the National Theatre) created with the found-footage method, a montage of the story based on film fragments. Petra Tejnorová has created two short films (Kniha o plánu- the winning film in the category WAVES at Ostrava Picture 2013, best cinematography Kamera Oko 2013). Her latest documentary Haló, je tam někdo? is a collaboration with the choreographer Tereza Ondrová and premiered at Tanec Praha festival in 2017.

Co-productions with the Tanec Praha Festival pose a great challenge to artists not afraid of new impulses, of exploring the unknown, of seeking new procedures and different roles than what we are accustomed to. Not accidentally does the theatre director Petra Tejnorová find herself on stage with the prominent Czech choreographer Tereza Ondrová. Their common interest in looking for the limits of the subtle humor, irony and absurdity with respect to the complexity of human relations is underlined by the direction of Karine Pointies. Inspired by the personality of Buster Keaton, albeit in an enlightened form, they manage to move us with their depth and sincerity.

A heron imprisoned in his plumage, sitting on a mountain top. A young eagle flying around in rhythmic circles until he disappears from sight. That is their savageness.

Nothing defines a human being as much as its inclination to absurd deeds with improbable results. In a world, in which reason is no more than a pretty façade, the sudden foolishness makes us face our own perception of normality and allows us to take as yet untrodden paths.

Two women, somewhere between burnout and exhaustion, exposed to one another like a palindrome in a mirror, lose direction and discover their animal savageness.